Near Sendai, in northern Honshu, at the Kawatabi Experimental Farm, this Miscanthus grassland has been maintained for over 20 years by annual mowing. Note how clearly the grassland and forest boundary is shown. The elevation is about 1600 feet.

This section of the Kawatabi Experimental Farm, part of Tohoku University, is maintained by limited grazing. Cattle like to eat Miscanthus and, if allowed to graze year round, will kill it.

Miscanthus is native to Japan and several other southeast Asian countries. The plants are ubiquitous and found along most roadsides and waste places. Additionally, Japan has Miscanthus grasslands at fairly high elevations, from 1,500-5,000'. This photo shows the Kirigamine Highlands in central Japan, not far from Nagano.

The mountain in the background is covered with Miscanthus sinensis and is maintained by regular burning. You can clearly see the forest and grassland border at the right of the photo. This is a popular tourist area with a cool climate at a high elevation, about 5,000 feet. These are "semi-natural" grasslands, because they would not exist without the intervention of man (through burning) at this location.

This is a hot springs and sulfur mine area near Hakone, south of Tokyo. Miscanthus is a common grass near active volcanoes and in poor, dry soils. 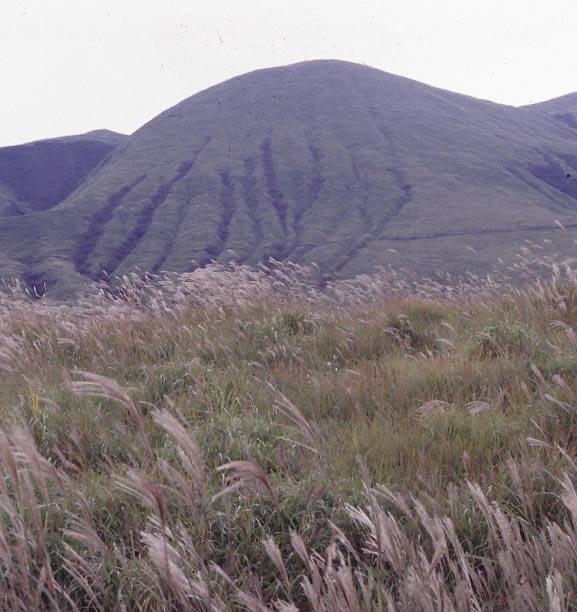 Miscanthus is a forage grass in Japan. In the fall it is harvested and sold, often in large bales. One of the largest grasslands is in the Mt. Aso area in central Kyushu, shown in these photos. The tractor is dwarfed by the tall Miscanthus. The Mt. Aso area is one of the largest calderas in the world. Not far from these photos was an active volcano.

The vegetation map of Japan shows very little grassland. The majority of Japan is evergreen broadleaf forest, shown in orange.

Above is the key to the vegetative regions of Japan. Grassland is a very small part of Japan's vegetation, due to the high moisture and mild climate.