Miscanthus as a Landscape Plant 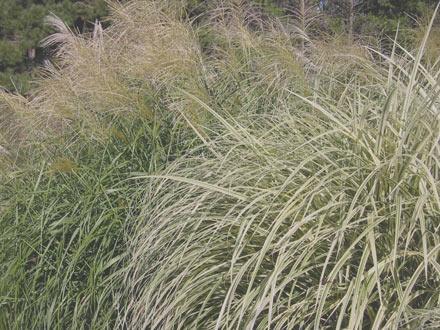 Over 50 ornamental forms or cultivars of Miscanthus sinensis are sold in the U.S. nursery trade, including selections with green and yellow foliage and various flower colors. 'Silberfeder' (Silverfeather) and 'Variegatus' are shown above. 'Zebrinus', 'Variegatus,' and 'Gracillimus' have been popular garden plants for over 100 years. Mature plants have large, showy, and feathery flowers, which appear from August through September and October. These ornamental forms ARE NOT THE SAME as the species or wild type that have become invasive in the Middle Atlantic States.

Although many progressive nurserymen now advertise these favorite grasses as Miscanthus, the name Eulalia will probably remain in the English language as a thoroughly naturalized word, like Geranium or Chrysanthemum. Eulalias probably rank among the first half dozen of the most popular grasses cultivated for ornament. They are remarkably hardy and universal favorites for bedding. One of the commonest and best designs for a bed of ornamental grasses employs Arundo donax as a tall centerpiece surrounded by Eulalias.

This link shows several current uses of Miscanthus. Darke (2000) and Greenlee (1999) have complete summaries of the ornamental forms and use of many grasses, including Miscanthus. Winter hardiness was originally thought to be a major limitation in growing Miscanthus, but Meyer et al. (1998) and Davidson (2000) have found acceptable winter hardiness in Zones 4 and 3, respectively, for many of the newer cultivars. Ornamental use of Miscanthus is very popular in the United States. Homeowners desire the many foliage- and flower forms, but gardeners should be aware of the possible spread and invasiveness of this grass.

Are Ornamental Forms or Cultivars of Miscanthus Invasive?

Recommendations for nursery professionals, landscape architects, and the gardening public regarding Miscanthus

Here are some recommendations regarding the uses of Miscanthus. Ornamental plantings of Miscanthus sinensis (the species, not a specific cultivar) are probably the source of the "wild type" Miscanthus sinensis that is now common in western North Carolina; near Valley Forge, PA; and other areas in the Middle Atlantic States. This wild type probably self-seeded from an ornamental planting of the species that is rarely found in the trade today. This wild type prefers acidic, light, well-drained soils that are low in nutrients and marginal for crop production, such as roadsides, power right-of-ways, along railroads, and steep embankments. The wild type usually sets a significant amount of airborne seed. Seed is the primary method of disbursement of M. sinensis and is enhanced along interstate highways. Correct identification of Miscanthus sinensis is important. This ornamental is a bunch- or clump-forming grass, with very short, inconspicuous rhizomes and a relatively high growing-point. The predominate means of spread is airborne seed or from seeds in the soil (seed bank).

In areas such as western North Carolina, where Miscanthus has become invasive, it is wise to limit and restrict any planting of Miscanthus. Existing, ornamental plantings should be watched carefully for self-seeding into nearby gardens, woodlands, or natural areas. In the fall, when flowers are conspicuous, usually October, is a good time to look for self-seeded plants.

Mass plantings along highways or areas of natural vegetation in mild climates, USDA Zones 5-8, can pose a major risk for self-seeding and introduction of the "wild type" of Miscanthus. Unless time and resources are put into managing and watching these plantings, Miscanthus should be avoided in these locations. 'Variegatus', 'Cosmopolitan', and other longitudinal striped forms pose the least risk for self-seeding.

The St. Louis Declaration on Invasive Plant Species has developed Codes of Conduct which have been developed and endorsed by the American Nursery and Landscape Association, the Perennial Plant Association, and several other groups as workable, voluntary approaches for reducing the introduction and spread of non-native, invasive plants. Homeowners, nurseries, and garden centers are encouraged to learn these codes and practice them.